Encountering wildlife in its natural environment is a privilege and, while spending time scanning the open sea can be therapeutic in itself, coupled with chance encounters these experiences can bring lasting smiles.

Many people are unaware of the range of creatures which inhabit Welsh coastal waters and while sea-watching may seem like a pastime only for the patient, at this time of year, it isn’t long before some movement indicates that there’s something special happening just offshore. During the early Summer our coast is a hive of activity with undoubtedly some of the most impressive wildlife spectacles to be seen.

Much of the Welsh coastline provides a perfect vantage point for watching coastal wildlife and with its rocky headlands, sweeping bays and remote offshore islands it is no wonder that the Wales Coastal Path has been dubbed one of the greatest long distance walks on Earth. Stretching from Queensferry in the North to Chepstow in the South, the 870 miles of path wheedles its way in and out of bays and inlets, over estuaries, beaches, along high coastal cliffs, past castles, fairgrounds and villages, through towns, nature reserves and over a patchwork of coastal sights, smells and sounds.  At this special time of year it is well worth heading to the coastal path, away from the beaches, to make the most of our more remote areas.

Watch out for of our largest and most remarkable seabird, the Gannet, with its gleaming white plumage, broken only by the yellow tone of its neck and its jet black wing tips. Gannets diving like torpedoes into the sea are often indicators that creatures such as porpoises are present, feeding on the same shoal of fish. Terns can be seen (and heard!) fishing for sand eels, whilst Fulmars, stiff winged in their gracious flight, bank effortlessly through the peaks and troughs of the waves. Vertical cliffs provide spectacular seabird nesting colonies for birds such as Razorbills, Guillemots and Puffins. The eggs of these birds are mostly hatched by now and the parents are busily finding food.

Look carefully and aggregations of ghostly jellyfish can be seen, their arrival coinciding with the Spring plankton blooms. The most common jellyfish seen in Welsh waters is the moon jellyfish, easily identified because of the presence of four bluish purple rings that can be seen from above.

The coast itself is a showcase for Summer beauty and it is possible to walk for hours without seeing another soul. Coastal vegetation is now at its best and although Spring Squill will soon come to an end there is still a vast range of plants flowering such a gorse, sea thrift, heather and orchids that will continue to delight us all Summer.

It is difficult not to wax lyrical about our coast and sea at this time of year but the point, in a round about way, is that now is truly the best time to get out onto the coastal path with a picnic and a pair of binoculars. 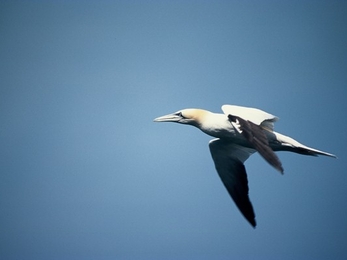 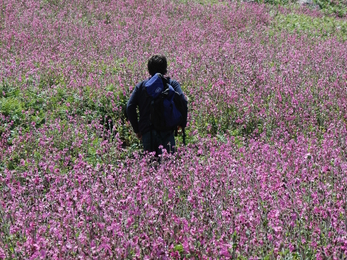 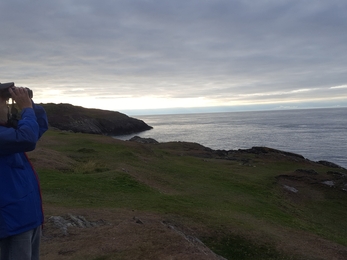