A tribute to Peter Benoit

Jackie Maynard, long standing volunteer and member of North Wales Wildlife Trust, shares her fond memories of Peter Benoit who made a significant contribution to the Trust’s knowledge of lower plants (mosses and liverworts) on our Meirionnydd nature reserves.

I was first introduced to Peter Benoit not long after I became a voluntary reserve warden in 1992 for the Wildlife Trust’s Coed Crafnant nature reserve in the Artro Valley, Llanbedr. Then, he had been the plant recorder for Meirionnydd for over 50 years, with detailed knowledge of its flowering plants, ferns, bryophytes and lichens.  In 1943 Peter and his mother came to live at Pencarreg on the 'Rock' above Barmouth - his permanent home for over 70 years. He always used public transport, so was grateful throughout his life for the lifts of friends to reach many special local places!  Because of its sheltered aspect and its moist climate on the southern slopes of Mynydd Llanbedr, Coed Crafnant is rich in both Western and Atlantic species of mosses and liverworts, and Peter was to help me find and name some of these often hidden, but beautiful little plants. Always good-natured, kind, patient and instructive in the field, he welcomed all with equal pleasure to share his love and knowledge of the plant world. He was a characteristic figure in his long green mac bent over a rock or boulder, a mossy bank, or examining a tree bark in detail. As he looked up Peter's smile was memorable. His old clipboard with a fresh titled page was always ready to make his preliminary listings and comments.  As well as visiting many natural places of note in Meirionnydd, as time went on Peter willingly came out to help monitor the Trust's sites - Abercorris, Cors y Sarnau, and the fascinating Gwaith Powdwr. It was there that we found the nationally rare moss Starry Hoar-moss Hedwigia stellata and the rare lichen Parmelia horrescens.

In the early 2000's frailty began to set in, although one of his last long walks was from Rhyd-y-fen, near Bala to Trawsfynydd, in late October 2002 on, as it turned out a very wet day. Peter died in his sleep on 21st January 2021 and is buried on the cliff in the beautiful cemetery of Llanaber. Wild gorse was laid on his grave, most fitting for Peter who was the Botanical Society of Britain and Ireland referee for all Ulex species and hybrids.

Many, many, will miss him. 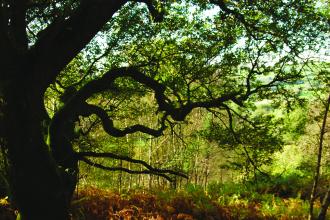 A hidden treasure that feels like stepping back in time to the ancient wildwoods of Wales. 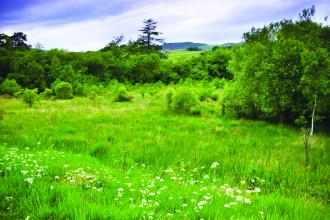 A special opportunity to see ecological succession in action. As you wander this peaceful wetland, try to trace its journey from lake to… 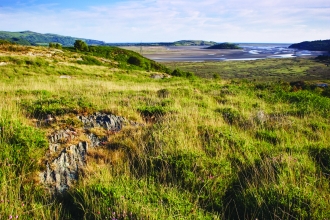 A fantastic post-industrial nature reserve with an explosive history.