After a disappointing season in 2017, the tern colony at Cemlyn Nature Reserve has bred in reasonable numbers in 2018.

The tern colony at Cemlyn has always been the key feature of the reserve, but there are occasionally poor years where breeding fails. Whilst this is a natural occurrence, it is always disappointing to see. This occurred most recently in 2017, when the colony abandoned the site entirely. Thankfully, this was not a total disaster for any of the species using it – terns are long-lived species and it appears that a significant number of the Sandwich terns at least may have successfully bred elsewhere.

However, Cemlyn remains an important site for terns, and we were very relieved when, after a very slow start, the colony returned in 2018. Although numbers were much lower than in recent history, the colony was still very healthy by comparison with 2017! In total, over 500 pairs of Sandwich tern nested and successfully fledged at least 180 chicks. Small groups of Arctic and common tern also nested, fledging 7 and 10 chicks respectively, whilst black-headed gulls (an important species for the protection of Sandwich tern against predators) successfully fledged around 100 chicks from over 220 nests. Whilst these numbers may appear low, this should actually be recognised as a very successful recovery season – promising, too, for an increased colony again in 2019.

The colony, and the wider wildlife of Cemlyn Nature Reserve, are monitored closely throughout the season by two resident North Wales Wildlife Trust wardens and a team of volunteers dedicated not only to protecting the terns but understanding the role such a colony plays in the wider ecosystem.  We need your help to keep it going!  To find out more, or to express an interest in joining the volunteer team for the 2019 season, contact our Volunteer & Membership Development Officer, Katy Haines, at katy.haines@northwaleswildlifetrust.org.uk 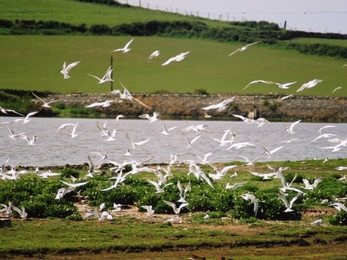 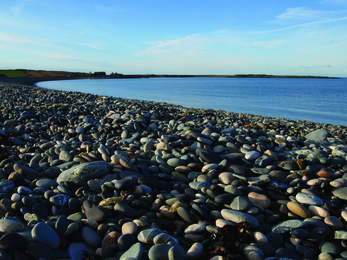 Over at Cemlyn, with July nearly gone, the young terns are starting their migration – and this year we can begin to follow them!

Cemlyn’s wildlife has a reprieve following the recent suspension of the Wylfa Newydd development.

No matter how well you think you might know a place and its wildlife, there are always surprises! This year, the terns of Cemlyn have…