We’re so grateful for all the help we get from our volunteers. Some have particular skills and like to root out and solve certain natural world puzzles. Ivor and Jane Rees have been providing plenty of information which has enhanced our Beached! project and the results of the investigative journey documented in the following report, have made it into our upcoming newsletter.

Find out more about our Beached! project.

While walking on Benllech beach on 1st December 2018, Mr Jeff Fannon noticed that there were thousands of small razor shells stranded on part of the beach and took photos on a smartphone. These have now been identified as a non-native species, which originates from the east coast of North America and is known there as the Jack Knife Clam.

... we were somewhat surprised to find that they were not any of the expected native species.

When the photos were shown to us at a North Wales Wildlife Trust event, we were not sure which species these small ones were, since there are three superficially similar species native to the waters off the Welsh coast. We were unable to check until a week after the initial observation, by which time the big masses of shells had dispersed. However, we did find some accumulations of shells to sample. On looking carefully later with a lens, particularly at features on the inside of the shells, not easily seen on a winter seashore, we were somewhat surprised to find that they were not any of the expected native species.

Checking with the excellent accounts on the website produced by the National Museum of Wales, indicated that they were the American or Atlantic Jack Knife Clam. They can be distinguished partly by the shape of the pallial sinus, which is the area inside the shell into which the feeding siphons can be withdrawn when the shell shuts. The sinus in this species has a wide and often slightly oblique W shape.

Subsequently, on 10th December we found patches of, similar sized, small shells of this bivalve at the Llanddona end of Red Wharf Bay together with some of adult size. This implies that there was a significant recruitment event in 2018 and there is now a large established population in the shallow sandy seabed off the east side of Anglesey. This species is considered to be an “Invasive Non-Native” (INNS).

The scientific name Ensis directus has usually been used for this species, with Ensis americanus as a synonym. However, Anna Holmes, who is responsible for the Mollusc collections at National Museum of Wales, points out that as a result of a 2015 taxonomic review, the correct name is now Ensis leei.

It was first found in European waters in the Elbe Estuary, Germany in 1979.

Ensis leei (= E. directus) is native to the east coast of North America from Labrador to South Carolina. It was first found in European waters in the Elbe Estuary, Germany in 1979. It has quite long-lived pelagic larvae and it is thought that they probably reached Europe in the ballast water of cargo ships. They have since spread widely around the North Sea and along English Channel coasts. The ones in the Greater Liverpool Bay area of the Eastern Irish Sea could have spread from established populations on this side of the Atlantic or from other ballast water introductions. Reports from Holland indicate that this non-native can become extremely abundant. Living on sandy ground near and just below low water, it has been prone to mass stranding elsewhere. 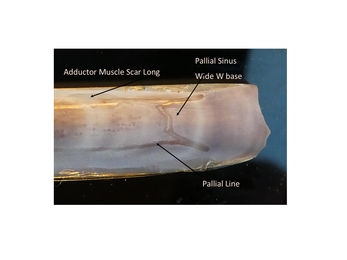 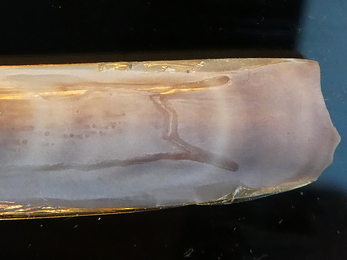 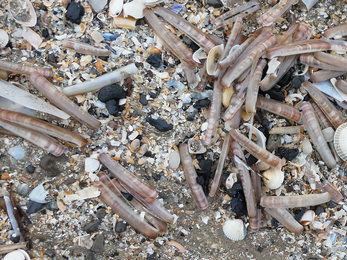 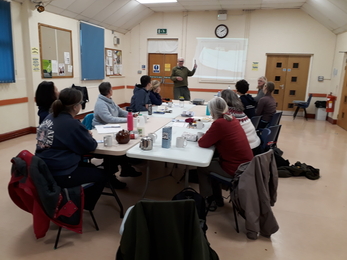 Ivor Rees presenting the differences at one of our Beached! training sessions. 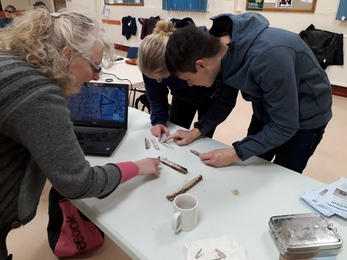