Terns of the tide

Many terns prefer to nest in coastal habitats and so can be vulnerable to high tides and storms. As we celebrate Cemlyn's 50th anniversary as a nature reserve we take a look at the history of the weir and its role in protecting the tern colony at Cemlyn.

Our previous blog recounted how Captain Hewitt moved to Anglesey in the early 1930’s and set up a bird sanctuary based around Bryn Aber; almost 200 acres of farmland, mudflats, saltmarsh, and the shingle ridge. This time we look at the story of the weir and its importance in protecting the tern colony.

Back in the 1930’s, during the summer months the mudflats partially dried out because the spring tides are not as high as in the spring and autumn. Accumulated rotting organic debris produced an unpleasant smell in hot weather and the mud flats and shallow pools provided an ideal breeding ground for large numbers of midges and mosquitoes. To alleviate this problem, Captain Hewitt had a dam constructed across the stream draining the area into the sea beside Bryn Aber. This created an area of shallow water permanently flooding the mudflats but leaving a few islands to the east of the house. Later the height of the dam was raised so that the water was 5ft deep behind the weir and averaged 1 - 2½ft across the rest of the lagoon making it more suitable for diving ducks, mergansers, little grebes etc..

A big concern following the creation of the Wildlife Trust Nature Reserve in 1971, was the threat of oil spills from the offshore Shell oil terminal at Amlwch and the likely pollution that could result. A protection scheme was soon. devised. Wylfa Power Station (Construction started 1963 – commissioned 1971) provided the skilled people to drill holes in the weir for the insertion of metal stanchions to which straw bales, to soak up incoming oil, were supposed to be attached held in place by netting. The metal stanchions were paid for by the county council and made by Huw Morris at the smithy in the old mill at Cadnant, Menai Bridge. The straw bales were provided by Mr Posnett of Hirdrefaig farm, Llangefni and stored in Jack Parry’s outbuildings on the coal yard site. Although the straw bales were never used and were eventually disposed of, the metal stanchions would have an important role to play in the story of the reserve.

Even before the Wildlife Trust acquired the nature reserve, there was concern that the original weir was deteriorating: the concrete was crumbling and there was a gap between the top layer and the layers below leading to a drop of the water level at times of neap tides and low rainfall. It was becoming obvious that a new weir was essential. There was much to-ing and fro-ing and faffing as we tried to decide what to do! Meanwhile some temporary repairs were carried out by the North Wales Conservation Corps.

The tern colony was a much smaller affair in those days: in 1969, 21 pairs of Common Terns and 5 pairs of Arctic Terns were apparently seen carrying fish to their chicks on the saltings. 2 Sandwich terns were also hanging about possibly because for the first time a pair of Black-headed gulls had nested and reared 3 young. This was a very significant development for the future of the reserve although we did not appreciate it at the time.

By the summer of 1973 there were 220 pairs of Arctic Terns, 30 Pairs of Common Terns, 12 pairs of Sandwich terns and 7 pairs of Black-headed gulls.  But then in May 1973 disaster struck and the colony was washed out by a high spring tide; but the resilient birds settled back to try again. The Wildlife Trust decided to try to prevent the colony from being washed out a second time on the next Spring tide.

Plans to build a temporary barrier to protect the tern colony were rapidly put together. Constable Ken Williams – later of Penrhos Nature Reserve – helped us with extra volunteers; plastic fertiliser bags were obtained from local farms, and everybody set to, filling the sacks with mud and gravel and piling them on top of the weir – holding them in place with trawl netting. The object of this exercise was not to totally prevent water entering the pool but to reduce the inflow at high tide so that the water level did not rise high enough to submerge the colony on the saltings before the tide fell. We were lucky: the weather in June was good, there were no storms and the terns flourished.

In 1974 we thought we would be more “professional”: we used proper sandbags, filled and placed on the weir by volunteers, but we placed them incorrectly and as the water rose up the sand bag wall, the meshes of the bags opened up, the sand washed out and the barrier collapsed into the pool! The 1974 season was not a success and the 100 pairs of comic terns, 30 pairs of Sandwich terns and the Black-headed gulls were washed out.

By 1977, protected by barrier mark 3, which was built with corrugated iron sheets attached to the metal posts slotted into holes in the top layer of the weir, the colony was doing well: 100 pairs of Common terns, 650 pairs of Arctic terns, 334 pairs of Sandwich terns plus Black-headed gulls all returned to breed. But then on July 3 1977, a storm in the Atlantic gave rise to a surge up the Irish Sea coinciding with a Spring tide – this “perfect storm” raised the tidal height well above the predicted level. The pressure of water against the barrier’s metal sheets caused the top layer of the weir to separate from the layer below and part of the top layer - the bit held together by the metal stanchions - slid into the pool carrying the barrier with it. Mike Smith, one of our most hard-working volunteers, had come over from Cemaes in the middle of the night because he was worried by the weather forecast, and he heard the sea rushing into the pool.

Next morning, we were greeted by the sad sight of a deserted tern colony and a tideline of unhatched eggs and drowned chicks - disheartening for all those involved: 1000+ pairs of terns lost their eggs and newly hatched chicks.

New plans ... and a race against time

The Wildlife Trust – and it is important to highlight that most of those involved were volunteers – responded quickly:  a Consulting Engineer – from Husband and Co. who had been responsible for the design of the reconstructed Britannia Bridge - was enlisted and drew up a design for a new Weir. A successful APPEAL was launched to raise funds for a much-improved structure. And by early April 1978, a contractor moved on to the site.

The task ahead was a complicated process and work proceeded in a series of phases:  first, all the water flowing out over the weir had to be diverted. Then two bunds had to be constructed one of which also provided a route (for machinery and people) out to the weir. Pumps were brought in to keep the water level as low as possible around the weir.

Pneumatic drills were used to remove the stepped structure on the outer face of the old weir and the new weir was constructed in front of the original structure.

It was a race against time … and returning terns. But by the end of the month, the weir was completed and the structure remains in use today. The new structure has 10 openings, 4 of which are permanently closed by “flap gates” – put in to cope with extreme flooding events! The other six openings can be closed during the nesting season by inserting “stop logs” threaded on to stainless steel rods (machined in the Wylfa workshops) which are screwed into sockets in the weir. By propping up the bottom stop log in 1 or 2 openings some water can get into the pool on high tides to raise the water level in prolonged dry spells. Adding the stop logs is one of our regular annual tasks before the terns arrive.  Around 70 stop logs are carried over to the weir and put in place – definitely a case of many hands make light work.

The level of the cill on the new structure is approximately 10 cms below that of the old weir. This meant that it was possible to walk out to the islands very easily. Over the years we have had problems with egg collectors, so we didn’t want to make it any easier for them. A crawler digger was brought in to excavate a deep channel around the saltings. The spoil was used to create a new island where an area of saltings had washed away over the years.

Successful results ... and the future

Since 1978 the colony has been protected by the weir and structural surveys have shown it remains strong. It is without doubt that it has played a key role in making Cemlyn one of the most important seabird colonies in the UK. In recent years, the role the weir plays in maintaining the brackish nature of the lagoon has also come to the fore. And so we reach a compromise between protecting the internationally important tern colony and the internationally important brackish water habitat!

In recent years extremely high Spring tides can just trickle over the whole weir structure. Perhaps a sign of sea level rise, and we could see a time when we will need to more actively manage the lagoon water levels by rapidly and temporarily removing the weir stop logs.

This article is based on a talk on the history of Cemlyn given by Jane Rees ; Jane was actively involved in the management of the nature reserve for many years. 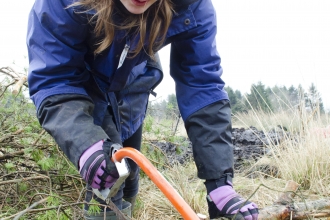 If you like working outdoors, or would like to give it a try, why not come along to one of our conservation work parties?

It costs less than 10p a day to join us and our other 7,000 members here in North Wales. Get involved with activities, visit 36…

A real wildlife haven with a spectacular seabird colony at its heart. A visit to Cemlyn is filled with possibility – you never know what…

A Tale of Two Seabird Cities

Taking a lead - Wildlife and dogs at Cemlyn

A key role for the Cemlyn wardens is engaging with the visiting public and this often involves advising on dog walking. Here we…