Amy Pickford, one of our Living Seas Volunteers in 2019, has moved on to new pastures. Here she gives a summary of the native oyster reintroduction work she's been doing with our colleagues in the Yorkshire Wildlife Trust.

A little bit about me

I graduated in 2018 with a BSc in Environmental Conservation from Bangor University. I continued to live in Bangor for another year in order to gain some experience in my field. I volunteered with a few organisations in the area, amongst them the North Wales Wildlife Trust. Due to my course only offering one marine based module, I decided to devote my time with the trust participating in task days for the Living Seas Project to improve my marine knowledge.

when the opportunity arose to help establish an aquaculture site for native oysters on the Humber Estuary, I couldn’t resist joining the team.

As of the beginning of October this year I started a year-long placement with the Yorkshire Wildlife Trust (YWT) as a Tomorrow’s Natural Leader (TNL). Our time is split between the office HQ in York, and training and task days on various nature reserves in Yorkshire. Most of the training and task days are land-based so when the opportunity arose to help establish an aquaculture site for native oysters on the Humber Estuary, I couldn’t resist joining the team.

The Humber Aquaculture Partnership is a two-year project run by the University of Hull and the YWT, funded by the European Maritime and Fisheries Fund (EMFF). The project is located on the Humber Estuary at Spurn Point with the aim of developing a multi-species aquaculture site including mussels, razor clams, seaweed and native oysters.

Oysters are known as a keystone species because the structures they form encourage other fish and plant life to the reef.

The population of native oysters sadly died out in the 1950s due to pollution and overfishing. Oysters are known as a keystone species because the structures they form encourage other fish and plant life to the reef. The reintroduction hopes to improve water quality and encourage marine life. To monitor this, several research themes will be developed investigating the impact of sustainable aquaculture on the surrounding species richness and biodiversity as well as growth, survival and the reproductive potential of the cultured species throughout the project.

A trial in April proved that 1,500 adult oysters transported from Loch Ryan showed the potential to survive at Spurn Point and helped to reveal the best place to establish the site, which is 3.5 miles out to sea in a sheltered area near the former bathing beach and carpark.

The team included Project Officer Daniel Cowing of the Biological and Marine science department and Dr Magnus Johnson of the Environmental Marine Science department at the University of Hull, as well as other TNLs and some students from the university who will be conducting research projects once the site has developed.

Here I describe my involvement over the course of a month helping with many aspects of work required in setting up this project.

Arrive at the discovery centre for 09:00-09:30 for transport by Unimog (Multi-purpose all-wheel drive truck - specialised for sandy terrain) to the point. 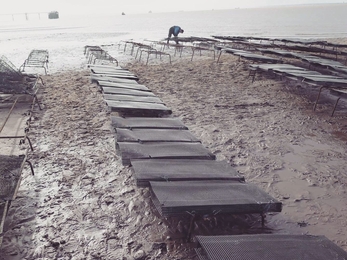 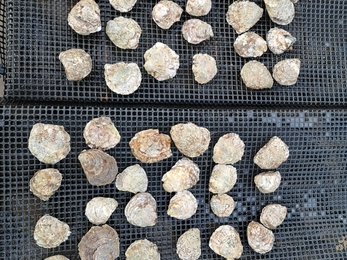 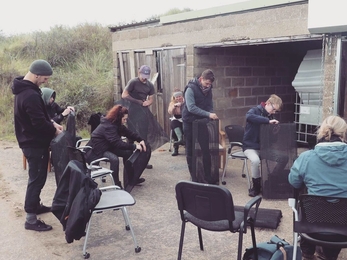 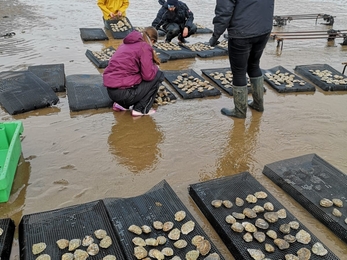 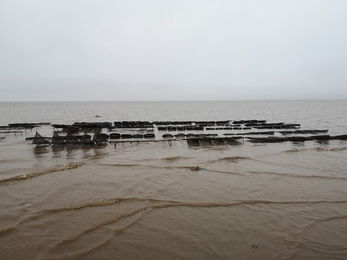 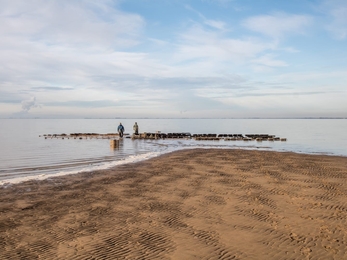 Tide flowing back in over oyster trestles - picture: Amy Pickford 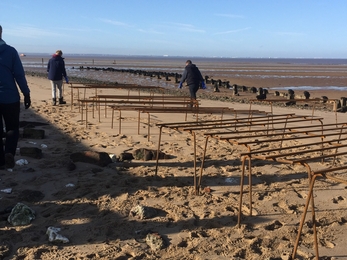